In Search Of Truth, Exodus 25 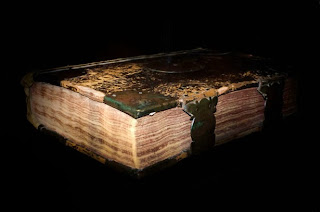 We're now entering the final phase of our overview of the Old Testament Law. In the next few weeks we'll look at the sacrificial system instituted by Yahweh for the people of Israel.


The Old Testament sacrifices are among the strangest parts of the Bible when viewed from the perspective of the average modern American. But when we look at them in their original cultural context, they begin to reveal on multiple levels who God is and what an amazing thing it is that he enables humans to have relationship with him.

The tabernacle was made from precious materials donated by those who voluntarily desired to help provide the resources. Aside from the obviously valuable minerals, material included wood that would be especially durable and cloth in colors associated with royalty.

Spices for anointing oil and incense were used to eliminate any mundane smells and create a completely different atmosphere, marking this as a place set apart for the purposes of God.

The word "tabernacle" means "dwelling place". Although sacrifices were made in this place, they were ultimately made in service to the construct's primary purpose, to be a dwelling place for God among his people.

So in the construction of the Tabernacle (which served as predecessor to the Temple) we can see again the desire of a Holy God to be with the people he loves, while still holding true to Justice. Until justice could be provided in full, there were evils among the Israelites that kept Yahweh from being able to justifiably have true intimacy with them. But in the meantime, the Tabernacle and sacrificial system were a strong indication that God wanted to have a restored relationship with humans.

The "Ark Of The Covenant" was a large chest overlayed with gold and equipped with large rings through which support poles could be inserted so that it could be carried without being touched.
The lid was called the "atonement cover" (or "mercy seat") and featured two sculptures of angelic beings facing each other with their wings overshadowing the atonement cover. The place in between them is where Yahweh said he would  meet with Moses and provide commands for Israel.

"The combination of cherubim as throne guardians, chests as footstools and statements in the Old Testament concerning Yahweh being enthroned on the cherubim (e.g., 1 Sam. 4:4) supports the concept of the ark as representing the invisible throne of Yahweh." (The IVP Bible Background Commentary: Old Testament, InterVarsity Press, pg.106)

In the ark we see God's nearness, in allowing his symbolic throne to be carried by his people. But we also see that the relationship is dysfunctional in some way, since the ark was not to be touched.

The Hebrew word for "atonement cover" is based on a verb meaning "to ransom or deliver by means of a substitute". This is the revealing answer for how God can be both perfectly loving and perfectly just. He does not slack off when it comes to justice. Wrongs must be dealt with and compensated for without exception. But in his love, God allows for punishment to be carried out on a substitute, rather than directly on the objects of his love.

The table was also an extremely holy object, indicated by the rings included in its design so that it could be carried by poles without any human having to touch it. Golden plates were made to place the showbread (or bread of the Presence) on. These twelve loaves of bread, replaced on the table each Sabbath, seem to have represented the crops of the twelve tribes of Israel and the fact that Yahweh is the source of life and prosperity for all of Israel. The offering served, at least in part, as a memorial of how Yahweh provided for the needs of the people.

(Leviticus 24:5-8) “You shall take fine flour and bake twelve loaves from it; two tenths of an ephah shall be in each loaf. And you shall set them in two piles, six in a pile, on the table of pure gold before the LORD. And you shall put pure frankincense on each pile, that it may go with the bread as a memorial portion as a food offering to the LORD. Every Sabbath day Aaron shall arrange it before the LORD regularly; it is from the people of Israel as a covenant forever.

The lampstand, or menorah, was made of pure gold, fashioned after an almond tree, the first tree to blossom each spring in the Near East.

The menorah provided illumination for the structure inside the tabernacle called "The Holy Place", which contained the table, the bread of the Presence and the altar of incense. It's purpose was both practical and symbolic.

The significance of the almond tree and its connection to the menorah is still a mystery to me, as the suggested symbolism I've read about to this point has been interesting but far from conclusive to me. Some of these symbols include that of life(the first tree to blossom in spring), revelation of truth (the light provided) and a call back to Yahweh's initiation of his rescue plan for Israel (Moses and the burning bush), all of which are interesting, but not unquestionable.


Now that we've looked at the basic materials used for its construction and some of the symbols represented in the smaller details, we'll zoom out next time with an overview of the general structure of the Tabernacle and then examine its use. Namely, that of the sacrifices and offerings performed in the Tabernacle.

For now, what I take from this is a continued affirmation of both God's unchanging, untiring love, and his equally perfect and untiring justice. In all of this God seems to be saying to Israel, "I want to be near you and I want you to be near me. But for now there are some issues between us that need to be dealt with."

As a geek I love exploring concepts that are strange and alien to me. And it doesn't get any more strange and alien than God. But sometimes when I spend a lot of time thinking about this immense, perfect and unfathomably "other" being, I feel distanced from him. My reaction is either to disconnect emotionally, and analyze God on a cold, conceptual level, or to become momentarily discouraged as I realize how different he is from me. How can he and I possibly have any kind of relationship?

If I'm thinking correctly, my mind then moves quickly to who Jesus is and what he has done.

(Ephesians 2:11-13, ESV) Therefore remember that at one time you Gentiles in the flesh, called “the uncircumcision” by what is called the circumcision, which is made in the flesh by hands—remember that you were at that time separated from Christ, alienated from the commonwealth of Israel and strangers to the covenants of promise, having no hope and without God in the world. But now in Christ Jesus you who once were far off have been brought near by the blood of Christ.

(Ephesians 2:22, ESV) In him you also are being built together into a dwelling place for God by the Spirit.

The sacrifice of Jesus, which makes the ineffective sacrifices of the Old Covenant obsolete, has enabled me to not only be near to God, but for him to actually dwell inside of me. If you've placed the fate of your eternal existence in the hands of Jesus, you can marvel at the mind-blowing nature of Yahweh and at the same time be thrilled and excited at the truth that he no longer dwells with us through a Tabernacle. He actually dwells inside of you, even with all the mess you bring to the table. And he dwells in you in increasingly greater ways as you pursue life with him.

(Ephesians 3:14-19) For this reason I bow my knees before the Father, from whom every family in heaven and on earth is named, that according to the riches of his glory he may grant you to be strengthened with power through his Spirit in your inner being, so that Christ may dwell in your hearts through faith—that you, being rooted and grounded in love, may have strength to comprehend with all the saints what is the breadth and length and height and depth,and to know the love of Christ that surpasses knowledge, that you may be filled with all the fullness of God.
Posted by Paeter Frandsen at 1:53 PM