Xbox One Reveal Vs. Sony PS4 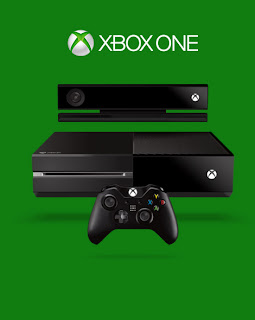 Although I was originally planning to wait until after E3 to talk about next-gen console news, the controversy surrounding the new Xbox console and their recent press conference were both too tempting to keep me waiting in silence. (Although I'm sure there will be even more to talk about after E3.)

Near the beginning of the Xbox conference, it was stated that the development team gave themselves a "new mission" with this console. To create an "all in one system". With this as their top priority, they named the upcoming system "The Xbox One". I'll let you check out the conference for yourself here: http://www.youtube.com/watch?v=-bFVptu6QbY

In the meantime, some points that popped out to me included:

1. The system is "built to amaze on day one and continuously improve over the generation ahead"

I'm not sure how this is possible, unless the rumors of being constantly online are true and processing power is handled by a remote server. (Yikes!) Recent information seems to suggest that consoles will NOT be required to be on at all times, so this claim by Microsoft remains a mystery to me. Unless of course the "improvements" are not of a performance nature but rather the addition of "apps". This interpretation would make more sense, given the second talking point that struck me.

2. The Xbox One boasts lightning fast navigation between different media. Go from video game, to broadcast tv, to a blu-ray in just a second or two. Surf the internet while you watch a movie or do other "neato" picture-in-picture stuff.

I must be weird. That or microsoft is. I don't really feel like watching tv or movies when I sit down to play a video game, nor have I been diagnosed with attention deficit disorder. I'm cool with just enjoying one type of media at a time. And if I really want to jump online for a second, well, I've got a phone and laptop to do that. Like I said, someone here must be weird.

3. Xbox One will recognize you by your appearance and voice alone, bringing up your preferences to better serve your needs.

4. "Your content is available and stored in The Cloud".

This nebulous phrasing left me a little worried. Smells like "online connection required". My internet can be a little "funny" now and then. Going this route is likely to frustrate me and get me thinking about other entertainment options more frequently than my Xbox.

5. "With our native editing and sharing tools, you'll have the most amazing bragging rights on xbox live."

I get on xbox live (silver membership only) once in a great while to browse games. That's it. I'm a passionate gamer, but I'm not competitive and I have no interest in bragging.

6. Steven Spielberg came on to announce the live action Halo TV series that will air on Xbox Live.

I don't need an Xbox One for that. If the show is any good, they'll eventually sell it on blu-ray.

Summary:
I guess some folks knew this beforehand, but this conference was not aimed at gamers. It was aimed at... I don't know. People who don't like video games who might suddenly, randomly be interested in getting an Xbox.

It reminded me of the advent of the smartphone. "It's a camera! It's a map! It's the internet! It's a calendar!" Okay. Does it handle phone calls any better? "No but look it's also a flashlight!"

I bought my 360 because even 2-3 years into its lifespan it had more RPGs on it than Sony or Nintendo. Not long after my purchase my favorite RPG franchises began popping up on the PS3 as well, making my future generation console purchase up for grabs. And with rumors that the Xbox One would not play used games without charging a fee, I thought this conference might seal the deal and officially turn my gaze toward Sony and Nintendo for the future of my gaming hobby.

Lucky for Microsoft, it was officially stated by Xbox reps recently that no fee would be required to play used games. Games are completely installed and don't require a disc to play them, unless that disc is detected by the Xbox Live network as being installed on another system. If the game is installed on more than one console, the game will only work on the console in which the disc is placed.

In other words, it will be like having a CD key that is on the game disc itself and can't be used by multiple people. This works for me, and has given Microsoft a chance to wow me at E3. But if they don't show me a boatload of unstoppably awesome exclusive RPGs for Xbox One, I'm probably switching to Sony.

In addition to the geeky information revealed, Microsoft also revealed something of their philosophical, one might even say moral or spiritual, values. The following highlights I found interesting:

"For the first time you and your tv are going to have a relationship."
"We'll stop just watching and start feeling alive."
"Achievements become dynamic and changing. They tell your personal story of how you play, not just what you've done."

So playing with the new Xbox will give me relationship, make me feel alive and tell my personal story? Okay, I'm oversimplifying, but when did video game consoles become the place to go for relationships, and feeling alive? When did our stories as human beings start to become about video games we've played? This is as funny to me as it is discouraging.

Wondering if Sony had anything different to offer in terms of gaming (or moral/spiritual values), I checked out their conference, held in February: http://www.youtube.com/watch?v=4UDHqZKeMZ8

As a gamer I found the following points interesting:

1. Sony is aiming to make PS1-PS4 games playable on the system.

After the revelation that 360 games would not work on the Xbox One, this was an exciting announcement. I had always regretted that I would miss the next God Of War game, but if I go with the PS4 I can go back and get caught up! This also seems like a great way for Sony to continue making money from nostalgic gamers and take a big share from the used games market by making classic games available for downloadable purchase. That's what I call smart!

2. In developing the PS4, Sony approached game developers for input and made developer feedback formative. The PS4 is a "developer focused" system. Sony seemed to be all about enabling developers to make great games.

This point was emphasized again and again throughout the conference. By all appearances, the PS4 will be the console for the core gamer community. This impression was even stronger in my mind after watching Microsoft unveil the i-phone 6, er... I mean the Xbox One.

3. A big honcho from Blizzard Entertainment came by and announced that Diablo 3 would play on the PS4.

That's pretty cool I guess, but not the explosive announcement that WOW or even Starcraft might have been.

Sony definitely seems to be the winner so far, but they actually fared worse than Microsoft when it comes to their philosophical worldview. Here are some interesting lines from the conference:

Did I miss something on the news? When did the "war with reality" begin? This whole metaphor seemed to underscore the existing potential for video games to pull people away from the important things in life, even living in denial of reality instead of facing it and dealing with it.

We don't need to be encouraged to avoid difficult conflict resolution in favor of gaming. We don't need to be persuaded to play video games instead of building worthwhile relationships. Speaking from personal experience, that happens all on its own. If we truly want our ordinary selves to become extraordinary, we need to devote ourselves to things of extraordinary worth.

The PS4 is "founded on the conviction that we must give gamers the kinds of multi-dimensional experiences they not only expect, but quite frankly deserve".

The growing pattern of "entitlement marketing" is both morally presumptuous and destructive to a healthy view of self. So just show us your wares, Sony. Let someone else judge who deserves what.

These conferences make for interesting viewing. They remind me a bit of political conferences. One part spectacle, one part bizarre pagan worship, and almost zero parts substance. Can't wait for E3!

Posted by Paeter Frandsen at 5:25 PM