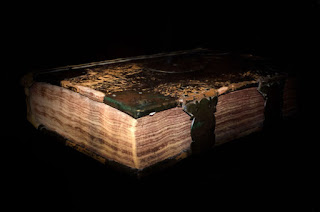 In these verses we see God's first interactions with the nation of Israel as a whole. The first impression he chooses to give them is one filled with awe and terror. Even so, Yahweh's desire is for relationship. He wanted to be near to the people and for them to come near to him. (v. 13) And his compassion and care for them is obvious in his actions. (v. 4)

Just as the people are all assembled before the revealed presence of the God of the universe, Yahweh calls up Moses again to have a private word with him. Although he had already told Moses before, he instructs him again to warn the people to respect the boundaries set between them and Yahweh, or pay the penalty of death. There is both uncompromising holiness and compassion in this. In fact this whole passage presents the incomparable nature of God's justice and compassion and how they interact with and compliment each other.

God is not an uncaring, cold-hearted judge, nor is he a softy that enables the sins of others. He perfectly balances both justice and compassion in his dealings with humanity. By warning the people a second time to respect the boundaries between himself and them, he implies both his own holiness and his compassionate desire NOT to have to punish anyone.

The reference to priests here is not completely understood by scholars. At this point no formal priesthood had been organized by Yahweh. In fact, the plan was still for the entire nation to be "priests" of Yahweh. (v.6) It's possible that "priests" here refers to "elders" among the Israelites, or to the firstborn, who had been claimed by Yahweh to serve his special purposes.(Exodus 13:2)

Moses reminds Yahweh that he and the Israelites are aware of the necessary boundaries. But Yahweh responds by sending him back to the people after warning him a THIRD time to respect the boundaries set up between Israel and Yahweh.

Yahweh is about to reveal his character through the law and instruction he gives the Israelites in the coming chapters. But it seems that before that he wants to start his relationship with Israel on the foundation of his own holiness. Almost as if to say, "The first thing you need to know about me is that I am not like you. I am like nothing you have ever imagined."

Last time I highlighted the advantage I think geeks have toward understanding God's holiness. And I still strongly believe that. Many geeks have a great capacity for both imagining and contemplating complex and "outside the box" ideas, which is a wonderful attribute for the study of God. But it's important to remember that God is not a mystery that can be solved.

My own love for the exploration of new ideas and concepts led to a love of theology. But it has also caused me to err on the side of wanting to box God in to something I can completely understand. I can wrongly assume that I am meant to understand some things about God and his commands that I may, in actuality, only be intended to obey, without having all the reasons why.

This isn't to say that we should give up on trying to understand the mysteries of God. But we shouldn't demand understanding of his nature or the reasons for his commands before we submit ourselves to him.

I find a lot of satisfying answers about God and his will for me as I study the Bible. But there are still some things that remain a mystery. And though I sometimes wrongly assume my right to understand everything about God before trusting him, I'm reminded by this passage that I gladly embrace one mystery that I may never understand:

Yahweh is amazingly, inconceivably "other". And yet he wants to have a close, moment by moment, interactive relationship with us.
Posted by Paeter Frandsen at 6:39 PM