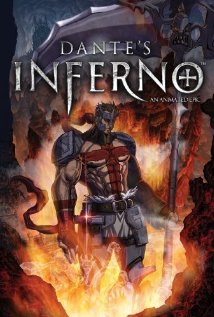 In 2010, Stars Media released "Dante's Inferno: An Animated Epic", based on the action fantasy video game that re-imagined the classic poet's most famous work as a bloody hack 'n slash romp through hell.

I haven't played the game or read Dante's original work, so my opinion on this movie is based only on the content it provides.

In Dante's Inferno, Dante is a soldier who returns from the crusades to find his love, Beatrice, dying in a pool of blood. After a bittersweet exchange, Dante watches her soul begin to ascend to heaven, only to be intercepted by Satan, who claims he has the right to take her to hell because of a vow that Dante has broken.

Dante chases Satan to the gates of hell and follows him into the fiery pits, stopping at nothing to save Beatrice from an eternal torment she does not deserve.

There are a few anime films I've really enjoyed, but I stay away from most of them. I have a strong aversion to the strange vocal expressions common to anime and the silly so-called "humor" that often pervasively taints an otherwise great anime experience.

Dante's Inferno avoids these problems by giving the animation chores to the Asian animators who know what they're doing, and giving the writing and voice acting chores to English-speaking folks who aren't writing and performing with the usual hallmarks of anime that bother me so much.

Animation duties were split up into chapters, with each chapter being overseen by a different, critically acclaimed director from the world of anime. The result is a movie that is sometimes a bit inconsistent visually, but that never fails to impress in the quality of animation and visual appeal. The designs of the various levels of hell and the creatures that inhabit them are both horrific and fascinating.

As you might guess, given the video game connection, there is a ton of action here. Though not so much that I became numb to it. The pace was handled well and the action is separated by scenes of grim exploration. Even so, a major flaw of the movie is a lack of established rules regarding the vulnerability of Dante. It's unclear throughout the movie what it would actually take to defeat him, and he never seems to be pushed to his limits or in considerable danger. This hurts the tension of the movie quite a bit.

Given the theme,  there is a lot of blood and gore. But where these elements might seem overdone in another story, they fit right in here, helping to create and maintain an atmosphere of dark torment.

The voice acting is well done and only rarely overstated compared to the visual elements being paralleled. Batman animation fans will also recognize the voice of Mark Hamill as Dante's father, an appropriate role for his noticeably aging voice.

The sound design and music also serve the production well, with a score that heightens the fantasy vibe and squishy liquid sounds that accent the bloody combat.

When it comes to the subject matter, I can't imagine NOT having some kind of worthwhile contemplation or conversation of spiritual matters either during or after this movie.

Although Dante's Inferno uses the trappings of a cultural distortion of Christianity from history, it departs from the teaching of the Bible at nearly every opportunity. Dante and every other human character has a distorted view of what the Bible teaches. Jesus may be referred to, but his act of redemption on the cross (aside from the fact that it killed him) seems to not factor into the story at all.
Even if you assume that the human characters have a distorted understanding of the Bible because of the time they lived in (which boasted incredibly bad biblical teaching, if it can even be called "biblical"), this doesn't change the fact that those in the spiritual world who ought to know better in this movie, clearly don't.

The most glaring departure from the Bible is easily seen after looking at simple verses like:

Genesis 18:25- Far be it from you to do such a thing, to put the righteous to death with the wicked, so that the righteous fare as the wicked! Far be that from you! Shall not the Judge of all the earth do what is just?" (ESV)

James 4:12 There is only one lawgiver and judge, he who is able to save and to destroy. But who are you to judge your neighbor? (ESV)

Scripture clearly teaches that only God is the judge  and decider of one's eternal state. But in this movie, Beatrice, who was supposed to go to heaven, is pulled into hell by Satan (where is God?) and must be rescued by Dante (where is God?) who carries a mystical cross with the power to free souls from hell and send them to heaven (where is God?).

And this is just the tip of the iceberg. This movie has similar value to studying cult systems. In order to understand broken religious systems and Christianity-based cults, we first have to understand what the Bible truly teaches in order to identify the false elements in a cult system. Likewise, someone like myself who is not formally trained in theology but is instead a theology "hobbyist", could pause Dante's Inferno about every 30-60 seconds to identify false teaching, or make a game of calling out scriptural conflicts in a setting with other Christians who also enjoy dark, gory anime. (An admittedly small group.)

Despite the countless problem's with the film's "Christian" theology, there is one genuinely moving moment involving repentance that stands out near the end of the film.

Dante's Inferno is a solid but flawed production that fans of action-horror anime will probably dig, and discerning Christians will either find frustrating or fascinating.

Rated R for strong bloody violence throughout, nudity and some sexual content