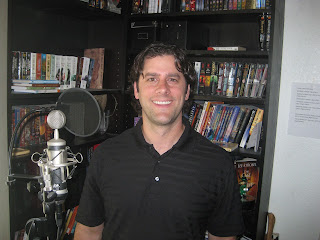 I've just returned from taking Michael Tully back to the airport this morning. I'm now sitting at my laptop in a daze over the tornado of activity we had in my office over the last two days. It's amazing the amount of work we crammed into two days of non-stop activity.

Tully (I've called him by his last name since we were in college together) arrived on Monday morning at 6:40 and we were back at my place and recording before 8am. Although he took a nap later in the day, I used the time to post on the blog and get some more work done. After he woke up again, we continued recording until after 10pm, taking breaks only for meals.

Yesterday, we were back in my office recording by 8am again and continued recording until around 4:30 when Tully officially finished his work as Raan Galvaanik for Spirit Blade 3 (and for the Spirit Blade Trilogy as a whole!). But his work still wasn't finished.

From 4:30 until 8:30, Tully recorded background lines for crowd scenes, etc. (Probably the most fun we both had the entire time he was here!) He also recorded some material for the Spirit Blade Adventure Card Game (more info on the audio components of the game coming soon!) where he reprises his role as Raan Galvaanik.

I recorded a lot of audio and video while we recorded and worked, and there is a ton of great material I can't wait to share with you guys. But after two extremely long days of constant mental focus... my brain is fried. So editing and sharing some of that footage will have to be a treat for another time.

Stay tuned for this week's podcast, which I plan to release tomorrow. I plan to share some audio from my time with Tully that I hope you'll enjoy!