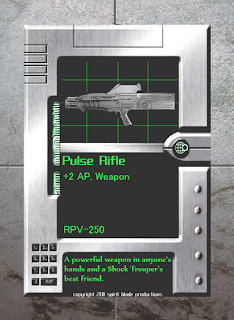 As with the other card images I've posted so far, this one is a "pre-cut" version, so imagine the border to be thinner and rounded at the corners. Even so, this is a pretty good example if an "item" card, and also gives me an opportunity to explain the concept of "RPs".

In Spirit Blade: The Adventure Card Game, one or two players take on the role of Seekers, who have made it their mission to seek out and reclaim hidden or lost information about the nature of humanity and the universe that, if exposed to the public, could radically alter the destiny of the human race to our benefit.

Atlantis Incorporated, who benefits greatly from humanity's ignorance, has worked hard to conceal such information. In addition, Atlantis has stolen a multitude of designs and projects created by Raan Galvaanik, who once worked for Atlantis and now serves as a key operative in the Underground Liberation. So Seekers also endeavor to reclaim materials that by right belong to the Liberation.

Information, or you might even say "truth", is the currency of the Spirit Blade card game. Seekers spend most of the time in the game on missions, which usually take them behind enemy lines inside Atlantis property. While sneaking through security systems and fighting opposition, Seekers are always searching for information valuable to their cause. This information is measured in "Resource Points".

Nearly all items have a Resource Point Value. The Liberation has to gain all supplies "off the grid", and so some items are valuable simply for their raw material components, while others, like data pads or similar devices, contain valuable information that can be put to direct use in the work of the Liberation.

Between missions, Seekers can turn in items to the lab techs of the Liberation in exchange for other resources, like weapons, armor, or useful gadgets. In the above picture, the specific type of item is a "weapon", as indicated by the text on the card. Most items modify the Primary Stats (Attack Points, Defense Points, Hit Points, Spirit Points) of the Seeker using them. In this case, the Pulse Rifle adds 2 APs to a Seekers AP stat.

An item like this one can be "purchased" from Liberation lab techs between missions using available RPs, or it may also be found on a mission. A Seeker may also choose to exchange this item to the lab techs for half of its RP value rounded down. (125 RPs in this case.)

Now if that all sounds confusing to you, we can just as easily cut through all the nonsense for you veteran gamers and say "in this game, Gold Pieces are called Resource Points."

Stay tuned for more next month!