Our Next Audio Book..."The Golden Knight"! 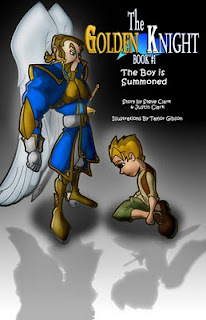 I'm pleased to finally announce the title of Spirit Blade Productions' next audio book! "The Golden Knight #1: The Boy Is Summoned", by Steve Clark and Justin Clark!

The synopsis is as follows:

In the beginning, the Kingdom was ruled by a wise and just King who ruled by the laws written in the ancient Book. The people were protected by the archangels and the heroic knights. All lived in peace and prospered. Those days are gone...

Flar, the evil fire lord, and his sorcerer, Murlox, have banished the King and his angels behind an energy field known as the Great Divide. The Book has been taken. The angels have fallen. The knights are gone. The people suffer. All that remains is the prophecy and a promise of hope.

Join Marsonee the archangel and Princess Rainna as they embark on a journey to bring an innocent farm boy toward his true destiny.

Given that the book is aimed at an audience of "tweens", and based on that artwork, you might think that this has "sterilized" and "safe" written all over it. But part of what drew me to the story was the inclusion of some "dark" story elements, such as an imposing villain who wears skulls on his armor, a twisted dark sorcerer, and the fact that someone even takes an arrow shot to the face! (I don't think he's gonna pull through.)

So the audio experience will be very much in keeping with what you've come to expect from Spirit Blade Productions.

The production philosophy we've agreed on is one similar to the live action "Narnia" films. Although there are certainly many elements aimed at a young audience, I'm approaching production with the same serious tone I might give to the "Pilgrim's Progress" audio drama series we're already producing.

Speaking of "series", you'll notice that this is book one of a multi-book series. At this point we've only committed to partnering for the first book in the series, but we're hopeful that the results will be successful enough to warrant audio production of the rest of the series as well!

Stay tuned! I'll have more details about my progress on the project and the release as we get closer to February!