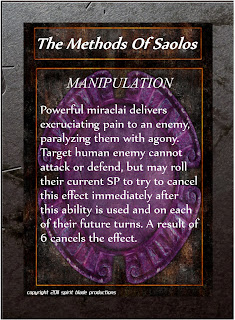 This month I thought I'd showcase a key type of card in the upcoming "Spirit Blade: The Adventure Card Game". The picture you see is the uncropped design for an Ability Card.

Most Seekers ("good guys") and some Enemies have abilities they can use in the game to give them an edge. Abilities are represented by Ability Cards, and can usually only be used once per Mission. (Though some can be used an unlimited number of times.) Abilities are divided into categories of Damage, Healing, Manipulation, Prophet, Enemy and Special. (Special Abilities are usually the ones that can be used without limit, such as Shifting, Resourceful, Security Systems and Counter Attack.)

The pictured card is a Manipulation Ability that immobilizes a human Enemy in battle. The concept is based on the way Saolos used miraclai in "Spirit Blade: Dark Ritual" to torture Merikk. Although most cards don't have quite the dark edge that this one does, as you can see, this card game will be every bit as "unsterilized" as the Spirit Blade audio dramas! And being a Seeker doesn't mean you don't still have some rough edges.

Although this card requires some knowledge of the audio dramas to fully appreciate and serves as a bit of audio drama fan service, most cards are completely approachable for those who have never heard of Spirit Blade before.

Play testing has slowed down a bit due to the Christmas season (and yeah, I'm playing Skyrim these days, too), but the hardest work is done and the game is mostly balanced. At this point I'm mainly polishing and making a few minor adjustments that I look forward to telling you about.

Stay tuned for another update in January!