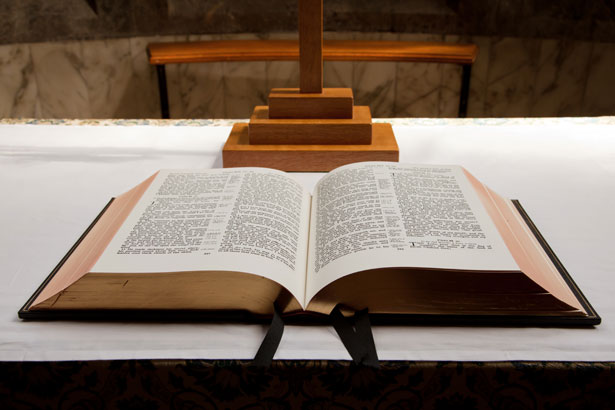 First some quick background on Melchizedek, since the author of Hebrews is drawing a lot from what little we know of him.

In Genesis 14, Abram (who would become Abraham), the father of the Hebrew people, had just returned from rescuing a family member out from the middle of a conflict between kingdoms. Two kings met Abram as he returned. One was the "king of Salem", Melchizedek. He gave Abram bread and wine and blessed him. After receiving the blessing, Abram gave Melchizedek 1/10th of everything he gained from his recent victory in battle. The account in Genesis also identifies Melchizedek as "priest of God Most High".

Genesis 14 tells us all that we know about Melchizedek. Yet the author of Hebrews says that Jesus is a High Priest "after the order of Melchizedek". This phrase comes from Psalm 110, and refers not necessarily to a formal "order of priests" as we would think of an "order of monks". The Hebrew word for "order" means "manner". So the "Lord"(Adonai) of Psalm 110, who is identified in Hebrews as Jesus, is in some way a priest "in the same manner" as Melchizedek. (Hebrews 6:20) The author then makes some observations about Melchizedek that he later applies to Christ.

Melchizedek was a king, but was also priest of "The Most High God". He blessed Abraham. The author will comment on this later. Then Abraham gave Melchizedek 1/10th of the spoils of battle.

In ancient times, this kind of tithe was common as a way of thanking a god for victory in battle. This indicates that Abraham recognized that Melchizedek represented Yahweh, and so Abraham honored Yahweh through his tithe to Melchizedek.

The author tells his readers that the Hebrew name "Melchizedek" translates to "king of righteousness", and that his status as the "king of Salem" makes him the "king of peace", since "Salem" comes from the Hebrew word for "peace".

The author observes that, as far as the record is concerned, Melchizedek is "without father or mother or genealogy, having neither beginning of days, nor end of life, but resembling the Son of God he continues a priest forever". The author isn't saying here that Melchizedek literally had no parent, that he was never born and never died. He is showing us that the absence of information about Melchizedek is significant concerning how the record of Melchizedek can be metaphorically applied to Christ.

There are already several implications about Jesus we can see in these verses.

1. Jesus is a king. His role is to rule over us. If we are thinking of Jesus in the right way, we should remember that he is our boss.

2. Jesus is a priest of the Highest and greatest God in existence. Any other so-called "gods" are cheap imitations in comparison to the Most High God, and yet we have access to relationship with this God through Jesus, who acts as the perfect, priestly go-between.

3. Jesus is a "righteous" king. This classically "churchy" word in its broad sense means "in the state one ought to be" or "in a state that is pleasing to God". If someone is "righteous", they are living in the "right" mode according to God's perfect standards.

4. Jesus is the king of peace. The implications aren't spelled out here, but we know from scripture elsewhere that Jesus will bring about peace in his ultimate reign over humanity and already brings about the peace of reconciliation between God and humanity. (Colossians 1:19-20, Revelation 21:3-4)

5. Jesus has no beginning or end. At the time this was written, the genealogy of a priest was important. If the lineage of a priest could not be confirmed he could not serve as a priest. (Nehemiah 7:64) So the idea that Jesus did not HAVE a genealogy (speaking of his divine nature) places him in a totally different category from all other priests.

So what do all of these traits of Jesus mean for our day to day grind through life?

I think being a geek can often come with an increased concern for what people think of you. That's certainly true in my case. Even before I was a geek I was overly concerned with the approval of others, and embracing my geekiness in later childhood and adulthood seemed to bring with it increased preoccupation with how others perceive me.

But Jesus sees me as I really, truly am. He doesn't fall for the image I try to present to others. I am completely exposed to him. And that brings some discomfort as I become more aware of the reality of that exposure.

I think in the light of that exposure we can tend to over-emphasize certain traits of Jesus and de-emphasize others that make us uncomfortable. But it's those contrasting traits of Jesus that make him the perfect fit for our needs, and I see that in these first verses of Hebrews chapter 7.

He is my king. He's the boss. I am not permitted to compartmentalize any part of my life. He has the right to rule over every shadowed corner of who I am.

By contrast, he's my priest. He opens the door and welcomes me into Yahweh's throne room. He  makes it possible for me to not simply cower and tremble in relationship with God, but to run up to his throne and into his arms. Scripture tells us that through Jesus we now have God not just as our father, but as our "daddy"! (As the word "Abba" translates in the New Testament. Romans 8:15, Galatians 4:6)

Jesus is righteous. He himself lives perfectly and commands us to live perfectly. (Matthew 5:48) There is a net of mercy and grace when we fail, but that does not nullify the command to chase after perfection.

By contrast, Jesus is the king of peace. We will repeatedly, shamefully fail. But that same righteousness of Jesus is now credited to those who place their faith in him, which means there is no reason in the slightest for conflict between us and God. We have peace with him now, and are promised complete peace in the future, when our struggle with sin itself will be over and gone.

Jesus is the ultimate priest. It's good to confess and wrestle through sins with other believers(James 5:16). But Jesus alone provides restored relationship with God. He's not like the leaders we have in our local churches, as useful as they are and as grateful as we should be for their service. Jesus doesn't get tired. He knows the pain of resisting temptation and has felt the consequences of sin, but he has no corruption or hypocrisy in him. He will never retire or have a schedule that's too busy for you. And he is affirming each of us to Yahweh every moment, saying, "Yes. I paid for her sin. Yes, I died for him."

I'm discovering that life with this Jesus is difficult at times. There is straining and stretching. But because of who he is, there is also rest and untiring love, forgiveness and acceptance.

Posted by Paeter Frandsen at 12:33 PM