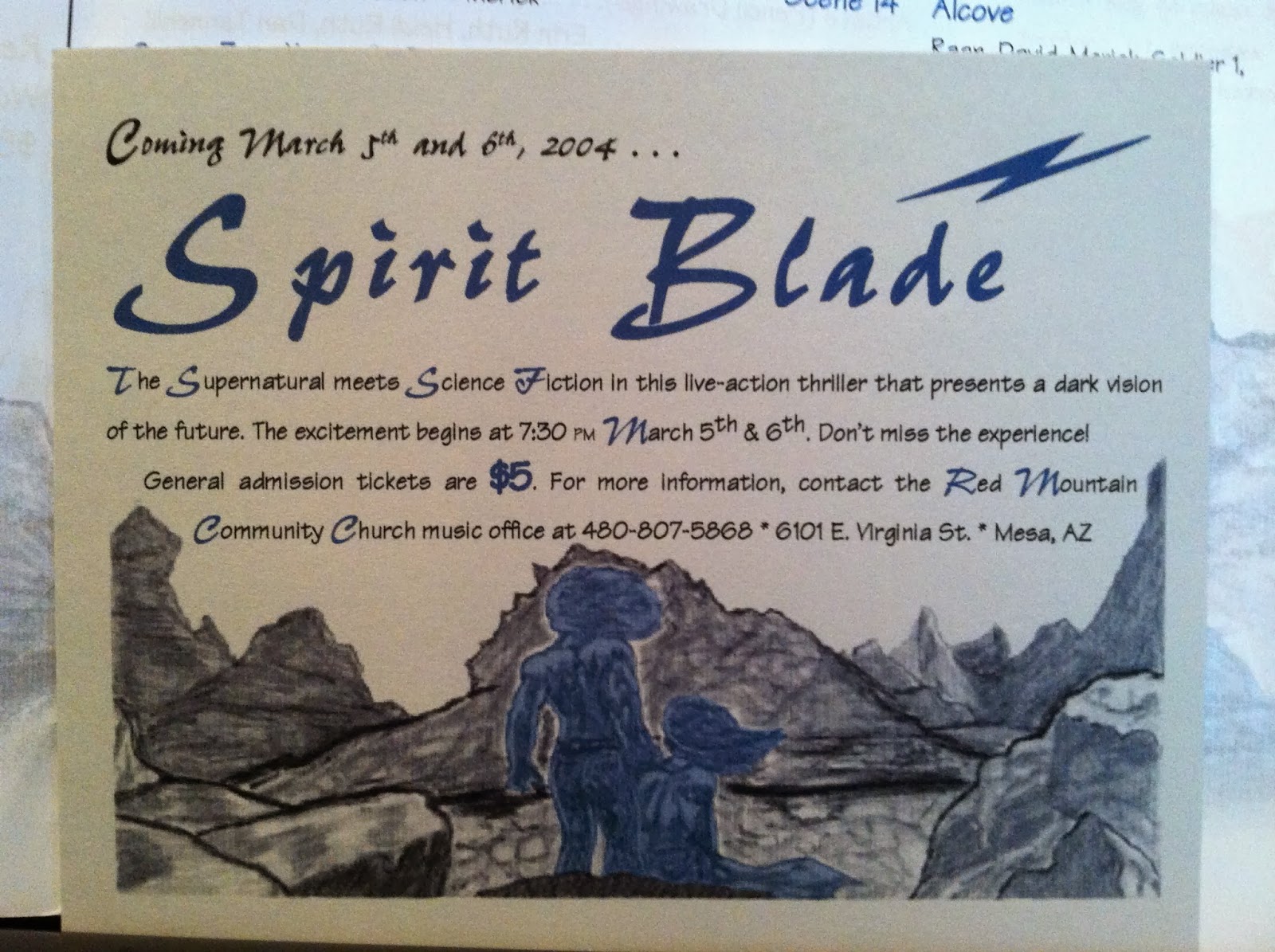 10 years ago the pastors and elders of Red Mountain Community Church in Mesa, AZ took a chance and not only allowed but encouraged and supported the production of a live, "action/sci-fi/musical/audio drama".

I originally wrote the story of "Spirit Blade" as a novella (of which the free audiobook version may be found here), then adapted the novella into an audio drama script which also included songs in the techno/industrial genre, performed by the characters in the story.

Directed by Michael E. Bryce (The voice of Isaiah Daniels), the live show was performed in much the same way classic oratorio is delivered, with readers standing in a line at the front of the stage, stepping forward to read their dialogue or sing. Custom artwork created for the project was occasionally placed on a large projection screen to further set the tone or provide images of what the scenes and characters looked like. Lighting and fog effects further enhanced the atmosphere, but the booming sound effects, cued live in rapid succession by a sound person, were undoubtedly the driving artistic effect of the experience.

"Spirit Blade" had surprisingly great attendance both nights it was featured. Surprising given the violent, bizarre nature of the project and the fact that it was performed at a church. The response from those who attended was enthusiastic and the leadership of the church encouraged me to do more projects like this one.

As happy as I was at the time with the live version of "Spirit Blade", I knew that the storytelling potential had barely been touched, and that far more could be done if told through an audio recorded format rather than a live format. So just a few months after the live event, I began scheduling actors from the live show to come to my home and record their performances, in many cases reproducing what they had done in the live performance and in some cases taking their performances in significantly different directions.

Over the next two years, while also leading the worship ministry of Red Mountain Community Church, I directed, mixed and produced the original recording of "Spirit Blade" in my spare time, with a few small adjustments to the script to pave the way for at least one sequel, and likely a trilogy.

To "Mickey" and the rest of the original cast of "Spirit Blade", thank you so much for taking a chance on being involved with this strange project. To the leadership of Red Mountain Community Church and all of my supporters there, thank you for partnering with and encouraging me. To my wife, who also lends her voice to Ebony Ravenloft, thank you for your commitment to me and the vision of Spirit Blade Productions. Thank you for the countless hours you invest in work you have no passion for, so that I can pursue the passion I've been given for this ministry. And my greatest thanks to "Yeisou Kreeshtaya", "The Only"... Yahweh God. You frighten and fulfill me. You instruct and inspire. Please help my vision always conform to yours. And equip me for whatever you bring about in the next 10 years.


Posted by Paeter Frandsen at 9:27 AM