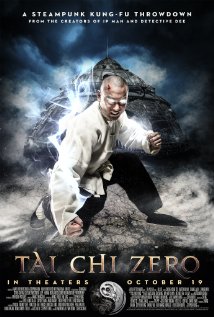 Tai-Chi Zero is a Chinese Kung-Fu movie that aims to blend martial arts action, steam punk and video game references into a creative, comically punchy, tongue in cheek mash up.


Yang Luchan is a martial arts prodigy born with a supernatural gift for fighting that is so powerful it is killing him. His only hope is to learn a different style of fighting (to like, re-balance his energy flow or some voodoo like that) so that his power will no longer be lethal.

The fighting style he must learn is only taught in the remote Chen Village, but the law of the village is that the unique fighting style may not be taught to outsiders. Meanwhile, Chen Village is in danger, as the industrial revolution brings a massive steam punk machine and its operators, who are dead set on demolishing the village to make room for their new railway system.


The meta-humor in this flick is fast and clever, borrowing much from Scott Pilgrim Vs The World. As new characters appear, a quick pop-up announces the character's name and the actor playing them, as well as some factoid about the actual actor, such as "He was in 'Once Upon A Time In China'". When the camera give a wide bird's-eye view of the village, small notices pop up across the landscape, identifying the various shops and locations, much like you would see in the village or world map of a Japanese RPG. Fight scenes also include video game pop-up announcements, identifying special moves or a "K.O.".


A huge problem, however, is the speed at which English-speaking viewers are expected to keep up with the subtitles. It's nuts, actually. What is certainly great comedic timing for those who speak Mandarin ends up being too fast to appreciate for the rest of us. I'm also sure that I missed out on many of the subtleties of the humor, given that I often couldn't tell the difference between something that was weird to be funny or weird because it's Chinese and I'm a simple uncultured American who doesn't "get it".


The action is well done, though if you've seen one modern Chinese Kung-Fu movie, you've kind of seen them all in my opinion. And because things are so over the top and human limits are undefined, combat seems like a pretty effortless affair that lacks any dramatic tension.


The costumes are nicely designed and steam punk fans will enjoy the Victorian elements present, as well as the numerous gears and clouds in the belly of the mechanical beast.


The performances are all fine for a Chinese movie. In fact, they may be great. But as is often the case they still feel over done to me, with odd vocalizations thrown in (not during combat, but normal conversation) that seem unnecessary. (Mmm? Hmph! Ahhuh!) If you watch any anime, you know the noises I'm talking about. And strangely, despite watching this movie in its original language, the post production voice over was lousy and made the movie feel "dubbed" even though it wasn't.


I don't see how this movie would lead to any worthwhile thought or conversation of moral or spiritual significance. It's just intended to be a fun, silly, creative action flick. And I think for those who speak Mandarin it probably is. I just wish I was one of them.


The movie ends on a light cliffhanger and is continued in "Tai Chi Hero"... which I will not be seeing.

Rated PG-13 for violence and martial arts action throughout

Posted by Paeter Frandsen at 10:34 AM