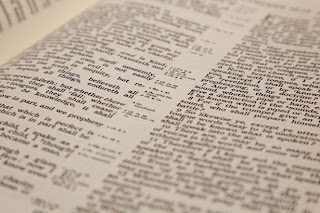 God commands Noah and his family to populate the earth, and re-affirms humanity's role as the rulers of all other living creatures.

God also introduces the option of meat to the human diet, though with some limitations. In the ancient world, pagan religions (which ultimately have inspired the evolution of vampire fiction today) taught that power and increased lifespans could be gained by consuming the blood of animals. They understood on some level, as God indicates here, that blood is life to a creature. It's possible that this pagan belief existed in Noah's time, and God may have prohibited the consumption of blood so that Noah and his family would not pursue power and independence from God.

God affirms the value of life, and the specific value of human life, by instituting a "blood for blood" system of justice. Life is a mysterious and wonderful thing, and human life is especially valuable, because it is made in the image of God.

God now establishes the first covenant with humanity recorded in scripture. A "covenant" is a (usually) formal agreement between two or more parties. We don't use the word much today, although a contract is close to the same thing. Sometimes requirements are placed on all parties involved, but sometimes only one party is responsible for anything. This first contract involved not just humanity and God, but all animal life as well. And the only responsibility was God's, who promised "that never again shall all flesh be cut off by the waters of the flood, and never again shall there be a flood to destroy the earth."

It's unlikely that no human had ever seen the phenomenon of a rainbow before this time, given the various scenarios in which water and light can combine to create one. But God assigned meaning to the rainbow at this point, by attaching it to his promise not to destroy the earth with a flood.

In this small collection of law and covenant we can already see more of who God is. We can see now that he values all life and especially human life. God is also consistent with what he says, and can be taken at his word. We can also probably assume from this passage alone that God desires that we trust him, and depend on him for our life and well-being, rather than try to gain power and life independent of him.

So it looks like even vampires can remind us about God's desire for us to have a relationship with him! The next time you see one, you can be reminded that God wants you to entrust your life, your well-being and the number of your days on this earth, to him.


Posted by Paeter Frandsen at 8:23 AM