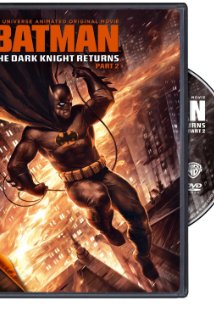 I'm a longtime comic book fan and Frank Miller's "The Dark Knight Returns" was an eye-opening example to me of what the comic book medium was capable of. In fact it is still considered by many to be one of the most groundbreaking and influential comic works of all time.

Although it wasn't without some shortcomings in my opinion, I greatly enjoyed DC Animation Studios' adaptation of the first half of this story, "Batman: The Dark Knight Returns, Part 1", and have since been waiting in anticipation for Part 2 to be released.

After watching Part 2, I'm very satisfied with the result, and I think fans of the first part will be as well.

The aging Bruce Wayne has come out of a 10-year retirement and become The Batman once again, in hopes of rescuing an apathetic Gotham City from the crime wave that's tearing the city apart.

At the end of part one, Batman has taken down Two-Face and the leader of the Mutant Gang that had been terrorizing Gotham. He's also taken on a new Robin, Carrie Kelly.

Now, after some quick training of his new sidekick, Batman is out to stop The Joker, who is scheduled to make a television appearance alongside his psychiatrist, who believes him to be harmless. Naturally he's dead wrong.

But the Joker may not be the deadliest opponent Batman has to face. In the second half of this story, Superman, now a sanctioned agent of the U.S. President, is ordered to bring Batman in, dead or alive. An order he reluctantly resolves to obey.

Everyone involved in the production of the first part is back for the second. In fact what we really have here is a single movie split in half, probably for budgetary reasons. But even if it means getting future stories in "installments" as done here, this is a model I'd love to see DC Animation repeat, as it gives them time to create a full-length cinematic experience, rather than the 75 minute run time their releases typically have individually.

The animation is great once again, and the score continues to evoke a bit of the Christopher Nolan films, while still clearly having its own attitude.

A few action sequences have been expanded upon, which was a fun surprise. Of special interest is the fight between Batman and Superman, which is much longer and even better than the one in the comic book, and delivers a fantastic, epic finish for the viewer.

There is also an extra bit of dialogue for Batman near the very end of the fight which further establishes what a real threat he potentially is to Superman. Great stuff, and Batman fans will eat it up.

The voice acting is great once again, although I'm still not convinced Peter Weller was the best choice for Batman, despite doing solid work with the part. Another unusual bit of casting was Michael Emerson as The Joker. You might recognize Emerson as Ben from "Lost" or Zep from the original "Saw".

Emerson's Joker, as the one presented in Frank Miller's original work, is far more contained, reserved and less bombastic than most interpretations of the character. Personally, I think more could have been done, in both this film and in Miller's original work, to make this "calm" version of The Joker more creepy and unsettling in his silence. But the character does eventually, suddenly, and very violently spring into action, in one of the most shocking and cringe-worthy moments I've seen in animation. (You'll know it when you see it. Enjoy!)

As in the comic book, the first half (Part 1) was much more character driven than the second (Part 2), and I miss this aspect, despite the story being interesting. Bruce's character is revealed less by haunting memories of his past and more by contrasting him with other characters.

Superman is voiced by Mark Valley, who has now replaced the aging voice of Tim Daley as my Superman voice of choice. His reserved, polite and conservative vocal manner are spot on for the Man Of Steel, even if his allegiance to the U.S. government isn't what I think of as the iconic version of Superman.

The theme of taking action to right the wrongs in our world is still strong, although it's slightly overshadowed by the political themes. A message of this story seems to be, "don't trust the self-serving government leaders to make things right. Take responsibility, get out there and make them right yourself."

As a Christian who aims to apply the Bible to every area of my life, this message seems consistent with scripture. We are not meant to hide away in our safe places while the world goes to pot. We are meant to represent Christ, represent justice and compassion, to a broken world, and make the wrong things right. In better words than I can write, "He has told you, O man, what is good; and what does the LORD require of you but to do justice, and to love kindness, and to walk humbly with your God?" (Micah 6:8)

The Dark Knight Returns, Part 2 is a great superhero animation experience that no fan of the genre should miss. And while not quite as strong as Part 1, it's more than a satisfying conclusion to Batman's story.