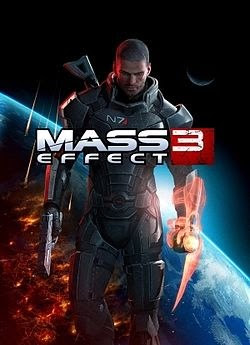 I've been a big fan of the Bioware video game company for years, starting with Neverwinter Nights, followed by Knights Of The Old Republic, Dragon Age and Mass Effect. (I'm even going back now and playing the Baldur's Gate PC games!)

Although I first rejected Mass Effect because of an early "timed mission" (hate those) and my discomfort with its "shooter-like" qualities, I came back to it a year later, with a different mood and different tastes, and discovered an awesome, story-driven "shooter for people who suck at shooters". I was hooked.

I loved both the first two games in the Mass Effect series and eagerly waited in anticipation of Mass Effect 3, which I finally purchased and played through over the last couple of months.
Unfortunately, I discovered that my tastes may have changed again.

First off, don't get me wrong. If you love the first two Mass Effect games, chances are you'll really like this one, too.

The combat is virtually unchanged, but now includes climbing and jumping mechanics that allow for more 3-dimensional levels to shoot through. The sights and sounds are just as delightful as before, and the voice acting, once again, is possibly the best in the industry. (Although I prefer the female Shepherd voice to the male, who seems a bit dry.)

The story is more character driven than ever, and the choices are often difficult to make, ending in a final choice that creates one of several different endings, each of which come in their own shades depending on choices you've made previously.

One of my favorite changes is the new "narrative" difficulty option, which makes virtually every moment of combat a cakewalk. I spent most of the game on the "Casual" difficulty, because I'm cursed with terrible hand-eye coordination, but every once in a while when I didn't feel like stressing over a big battle, I would simply switch the difficulty down to narrative to get me through without any frustration.

Given that this new generation of consoles is seemingly impossible to invent cheat devices for, I think ALL games should come with a "narrative" option, or the equivalent. There are a TON of games I would spend my money on if I knew they had this feature. I don't care about missing out on achievement points (which happens on some games when you lower the difficulty) or bragging rights. I play games to explore the world the game designers have created, and too often the difficulty of a game prevents me from doing that.

I also think that in the Mass Effect series, and in Mass Effect 3 more than previously, Bioware has potentially invented a new genre of game, if future developers notice what they've done and run with it further. I would describe this new genre as an SG, or "Story Game". Or maybe an SSG, "Strategy Story Game". Because in today's world of Role Playing Games, Mass Effect no longer makes me feel as though I am "playing the role" of the main character when compared to games from Bethesda Studios, like Fallout 3 and Skyrim. Instead of giving you true control over the main character, Bioware is really giving you limited control over the story of the game.

There is definitely a good story to follow here. And that's part of my point. I felt like I was "following" the story, or at best changing its direction, rather than immersively entering into it. The branching dialogue options give choices, but since it's not clear exactly what Shepherd will say when picking a given option, I didn't feel like I was in control of Shepherd's personality as much as I'd like to be.

The context sensitive "Paragon" and "Renegade" dialogue options from Mass Effect 2 reappear in this game, but don't help me feel more in control of Shepherd either. In fact, near the end of the game, I was forced to trigger a "Renegade" reaction or fail the mission and lose the game. This made my ability to choose seem like a patronizing illusion, as the game makers forced me to fit into their story at that point.

I know, this is nit-picking a bit. Especially compared to classic RPGs like Final Fantasy and Dragon Quest with FAR greater choice limitations. But the truth is that too many other games have raised the bar for "role-playing" in recent years, making it hard to go back when my idea of what constitutes an RPG is changing.

The mission system was also not very helpful, as you are given missions in the first third of the game that you may not be able to even begin until you've accomplished several other missions. And you have no way of knowing what will "trigger" your ability to access the new locations needed to begin these many side-quests. (I had to find the answers online.) This resulted in choosing to either do most of my side-quests right before the end of the game (at which time you can be confident you'll have access to the places you need) or to simply give up on most side-quests because it's a pain to figure out when you'll be able to complete them. (I chose the second option.)

Mass Effect 3 still has some great gameplay and fans of the series shouldn't think twice about getting it. In addition, after complaints about the somewhat unresolved ending for the game, Bioware created a free add-on for the game that wraps things up with satisfying resolution.

It's a solid game and a worthy end to this groundbreaking trilogy. But if you've never tried this series before and you're a big fan of open world RPGs in which you can loot, make, do, be, and customize an endless list of things, the Mass Effect games will fall short for you.

But now to the parts I thought were especially interesting.

The writers of Mass Effect 3 definitely have some philosophical ideas and values they want to explore or promote, and they shape the game in subtle ways that limit your ability, as Commander Shepherd, to disagree with their philosophy and values, unless you want to force yourself into the category of "Renegade" (the game's morally dark path).

Here are just a few of the things I took note of:

Granted, you have plenty of opportunity to be promiscuous heterosexually as well, which also doesn't fit into God's intended design. Either way you look at it, there seemed to be an increasing desire to make this game "sexual" in nature.

I remember Bioware promoting Dragon Age 2 in interviews and being asked more than once "who can you sleep with?", as though this was one of the most popular questions on the minds of Dragon Age fans. (And for all I know, it was.) After seeing the shortcomings of Dragon Age 2, I had to groan inwardly as I wondered what good things were sacrificed in the development schedule in favor of making a more "sexy" game.

Although that isn't quite what happened here, there are even more opportunities for various romantic and ultimately sexual relationships of all kinds. I find it very interesting (and as a gamer who would like improved gameplay instead, a little disappointing) that Bioware is clearly making this aspect of gameplay a high priority.

But more than the increased "sexuality" of the game, I noticed the strong, pervasive naturalistic philosophy driving character development and, in the end, the plot itself.

At one point, Shepherd asks a sympathetic character if they are feeling ashamed. Their response was to say that "shame is a response to societal judgment." This is a very naturalistic, or atheistic idea of shame. In truth, we can feel shame before anyone in "society" is even aware of what we have done that makes us feel ashamed. The theist recognizes that they are ashamed because there are objective moral truths and a God who watches and judges everyone. The atheist usually attributes these feelings of "private shame" to an anticipation of what others would think of us, should they learn of our shameful act.

I also noticed a brief reference to the "multiple universe hypothesis" that the scientific community once considered as a method of dealing with the vast amount of time that natural evolution would require (and that earth's history sorely lacks). That isn't the context in which it is brought up in this game, but the fact that pop-science fiction still clings to that outdated hypothesis (even when most mainstream scientists don't) is interesting as well.

The naturalist view would argue that if humans created AI with sufficient intelligence, it could potentially become self-aware and just as much a form of life as humans are. The theist, or spiritually minded person would argue that humans have a non-physical component that they could never reproduce in a machine or program.

There are two moral paths you can follow to various degrees in Mass Effect 3. The "Paragon" path is the noble, self-sacrificing "good" path, while the "Renegade" path is more about doing whatever you feel like in the moment and not taking crap from anybody. While the Renegade path isn't exactly "evil" it's certainly the "less good" path.

I think it's very telling that the Paragon path always affirms the equal personhood of Artifical Intelligences, while the Renegade path rejects machines as having personhood equal to that of humans.

This theme isn't just a recurring background idea, either. In fact, the final choice and climax of the game requires Shepherd to make a decision almost entirely based on whether or not he views synthetic "life" as equal in value to biological life.

On the creative side of my brain, I'm a little surprised the creators of Mass Effect 3 would use this theme so strongly after it was already explored so thoroughly in the Battlestar Galactica tv series just a few years ago. My surprise is increased and the parallel becomes even more noticeable as I recognize the handful of voice actors in this game who were also major players in the BSG tv show.

This suggests to me that the nature of human life may be the "trendy concept" that science fiction is playing with right now. But rather than leave the question open (as in sci-fi stories like The Terminator franchise) modern science fiction stories exploring this concept (such as Mass Effect, Battlestar Galactica, Tron: Legacy, and of course the Matrix Trilogy) seem to want to answer the question for us, leaning strongly in the naturalistic direction.

Mass Effect 3 naturally shouldn't be missed by fans of the series, though it could have been much stronger and innovative rather than so much "more of the same". I think it's very likely to give those playing a reason to think about the nature of human life and the spiritual world. I can see two Mass Effect fans easily sharing their views on the spiritual or naturalistic nature of man after playing this game.


What do these scores mean?


Posted by Paeter Frandsen at 8:37 PM