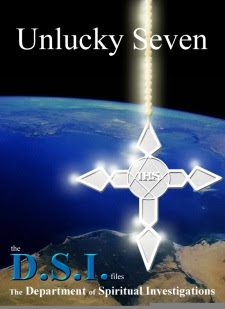 At long last I am able to present the newest audio drama from The Spirit Blade Underground Alliance, the online creative community of volunteers sponsored by Spirit Blade Productions!

Why "at long last"? Because this project has actually been in development longer than any other project the Alliance has released. It was the first script I gave a green light to and the first to hold auditions. But for reasons that still puzzle me, God has chosen again and again to delay the development of this project. Three different mixers have taken it on and both of the first two had to step away from it because of some difficult things that came into their lives beyond their own control.

After many more months of searching for an interested mixer, a new mixer joined the Alliance and eagerly took on this project a few months ago. He's done a wonderful job and as of today I've posted the audio drama on the Spirit Blade Underground Alliance page.

It's called "DSI Files: Unlucky Seven", and is set in a future where special agents sanctioned by the church are sent out to investigate and deal with significant spiritual events or threats. The script is a cool blend of sci-fi and the supernatural (which you know *I* dig!) and I hope you enjoy checking it out!

You can download it for free right now on the Alliance page!
Posted by Paeter Frandsen at 2:42 PM