Finishing The First Draft And The Future Of "Spirit Blade" 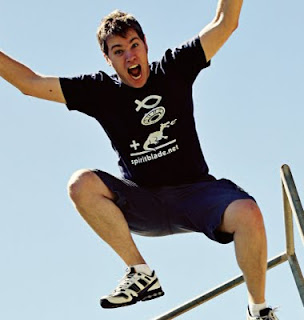 I'm amazed at how fast I've been writing the first draft for "Spirit Blade 3"! Yesterday and today I've wrapped up three plot threads and I'm currently writing the climax.

I plan to go back through the script to ensure that there is a good amount of action throughout, but I think I can safely say that it ramps up enough at the end, with enough epic scale, to be worthy of the end of a trilogy.

But while writing the big fun action at the end of this script, I'm also writing the final scenes I'll probably ever write for at least some of these characters. There are elements of both triumph and tragedy as this story comes to a close, and it's fittingly sad that I prepare to say goodbye to these characters and their stories.

Yet I still wonder if this will really be the last we'll see of Merikk and his allies (or his enemies for that matter). It's too soon to make any announcements. In fact, it may fizzle and no announcement will come. But I can at least say that I have been toying with an idea that will in some way continue the world of Spirit Blade. In fact, more than "toying", I've spent extra hours every night this week intensely exploring a possibility that, if it works as I hope, will mean a new "Spirit Blade" experience for you all to enjoy. (And for those reading the forums, I am not referring to the potential i-phone game, which I'm also excited about!)

There is still plenty of conceptual work to be done, but I'll say I'm VERY excited about this idea, and hope it will be something I can launch at the same time that Spirit Blade 3 is released. That's all I can say for now. Let the speculation commence!

Have a great weekend!


Posted by Paeter Frandsen at 2:04 PM