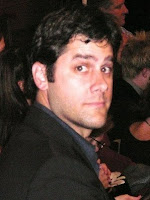 Since there won't be a podcast this weekend, I'm taking the week off from "In Search Of Truth" as well. But here's a special treat for you Spirit Blade fans!

In 2007, he and a buddy flew out to England to attend the first Led Zeppelin concert produced in... well, a loooong time!

Not only that, but he was first in line and made it on the news! You can check out the links below for the video he's in. (He even gets interviewed!)

Not to be outdone in his insane Zeppelin geekiness, Mike was quick to clarify that "The dude who speaks first (in the video below) is lying! Andy and I were there first , about 4 hours before them, but we went back to the hotel to get a few hrs sleep, then those guys came and set up in the wrong place, so andy and I lined up in the correct place, first!!!!"

Mike spent a number of years in a Zeppelin cover band (he's also a trained classical vocalist and has his doctorate in Vocal Pedagogy) and his knowledge of the legendary group is freakin' encyclopedic!

The first video has more of Mike (visually) and is a little shorter. The second is a longer cut with more British news anchor commentary, but no more of Mike. Enjoy seeing video of "Raan" for the first time, and in a very unique light!