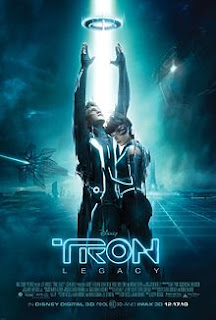 Long before Neo entered the Matrix, "Tron" presented an action packed visual feast that took us inside the world of computers. Decades later, we finally return to this amazing digital world in "Tron: Legacy", which follows the story of Sam Flynn (Garrett Hedlund) as he searches for his father, Kevin Flynn(Jeff Bridges).

Kevin Flynn discovered a hidden digital world that exists in all computer software. It is populated by programs that have personalities and emotions, much like humans. Humans are referred to as "Users" and take the role of deities for the programs they create. But Kevin Flynn disappeared into this computer world when his son was just a boy and has been missing ever since. Sam, now 27, goes in search of his Father on a journey that takes him into the computer world where he must survive gladiatorial games and the multitude of enemy programs he encounters.

Although the visual effects are not the breakthrough that the original Tron was, they are rich and beautiful and mesmerizing to watch. The attention given to even the glowing trails of the light-cycles is worth the effort. And since much of the action is digital, the camera is able to go places it normally could not, allowing for some "Matrix-like" moments that provide further candy for the eyes.

There is plenty of action to be had in this movie, and don't let the PG rating fool you. The tone is dark, the danger is serious and the stakes are lethal. I have to assume that since the nature of the violence is purely fantastical, rather than bloody or realistic, the film didn't warrant a PG-13.

There are also some "dramatic action shots" that just plain feel good, such as the first time Flynn enters the battlefield and showcases some "User Power" in an understated (maybe a little too understated) but effective manner. Much like the first Tron, the action is a little weighted toward the first half of the movie, but not so much that things ever become boring. The story continues to move forward with almost no wasted time.

Along with the darker, more emotionally realistic tone comes some questions that we expect more realistic films to have answers for. What exactly are the Flynns experiencing in this "computer world"? They aren't inside a virtual reality program, so why do things look the way they do? An opening monologue by Kevin Flynn potentially hints at the idea that what humans experience in the computer world is stimulus created by their brains to make sense of an existence so abstract they would otherwise have no reference for it. (Much like the spirit world in the "Spirit Blade" audio drama trilogy, if I may so shamelessly plug.) But if this is the case, the script never clearly spells it out. Despite the more serious tone of the film, we are still asked to suspend a ton of disbelief about what all of this is and just go along for the ride. If you can do that, you'll have a lot more fun.

Performances are handled very well by all involved, and Jeff Bridges brings brief but wonderful emotional gravity to the movie when he first sees his son again. The writing is also fairly clever, with Kevin Flynn frequently using outdated slang from the 80's. (He's been in the computer world since then.)

An otherwise fantastic movie experience is significantly marred by using digital effects to recreate a young Jeff Bridges for flashback sequences and the character "Clu". Based on the plastic look of the final product, I'm assuming they animated him from scratch, rather than digitally manipulating footage of Bridges, as done for Patrick Stewart in X-men 3. I shaved a little off of an almost perfect score every time "digital Bridges" (or maybe "Dig-Bridge"?) came on screen (which was quite often), because the weakness of the effect took me out of the story and distanced me from the characters being presented. A real shame. They would have been much better off having Clu age in appearance along with Flynn and using some cosmetic tape(to pull skin back) and airbrushing for the Kevin Flynn flashbacks.

This film is less likely to induce meaningful conversation than the first one, though there are still elements worth talking about as we contemplate important real world issues. The significance and uniqueness of Users as deities is emphasized much less, and interestingly reflects (intentionally or not) our general indifference to God today compared to the 1980's. If Kevin Flynn IS an analogue for God (and I don't know that he intentionally is), then the theology presented is one of a flawed God who needs to apologize to his creations for making mistakes.

Of more central significance is the life form Kevin Flynn has discovered in the computer world. "Isoes" are genuinely sentient beings (unlike normal programs who only seem to be sentient?) that "manifested" in the computer world because "the conditions were right" for their development.

Despite the fact that Kevin Flynn refers to their appearance as a "miracle" on a number of occasions, this spontaneous self-creation of life under the right conditions closely parallels the atheistic evolutionary worldview which has to rely on ultimately undefined "conditions" as being responsible for the emergence of life. This is nothing new in the sci-fi world. Machines are gaining sentience all the time through undefined or ludicrous means. Terminator, The Matrix, I Robot, Battlestar Galactica, even the "evolutionary lightning bolt" in Short Circuit! (So far, power surges only seem to hurt computers, not bring them to life. But maybe we should try a few billion more times.)

Whether these issues stand out to you or not, this movie seems much less interested in making any kind of philosophical parallels when compared to its predecessor.

"Tron: Legacy" is an incredible visual feast with a lot of fantastic sci-fi action and an interesting story that no fan of the genre should miss. And if you found yourself examining the theological themes in the original "Tron" there are still a few things to ponder in this movie.