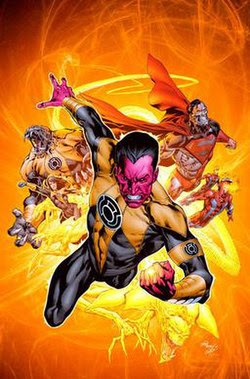 The comic book event of the summer has arrived! If you think that the events of a Green Lantern special event won't have significance for the rest of the DC universe, think again. Sinestro, former GL and current renegade psychopath, has regained his yellow ring counterpart to Green Lantern technology, and made duplicates of it to form his own evil "Sinestro Corps". In direct philosophical opposition to the Green Lantern Corps, the Sinestro Corps exists to create order through fear.


For this terrifying task, Sinestro has recruited evil and disturbed aliens from across the universe and already the GL casualties number in the dozens.

So why does this event have any significance for the rest of the DC universe? Because Sinestro has recruited villains (and even one HERO!) that are among the most powerful characters in the DC universe. And not just GL villains, but major players in the DC Universe.

The writing is spectacular and gripping, and the art is detailed and engrossing. This one-shot that leads into the main events in Green Lantern and Green Lantern Corps is NOT to be missed!

Included in the roster of the Sinsetro Corps:
Cyborg Superman
Superboy-Prime
Kyle Rayner and lastly, prepare to shoot liquid crap...
THE ANTI-MONITOR!!!
The DC Universe is officially hosed...