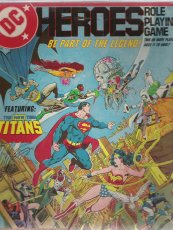 The first paper and pencil role-playing game I ever played was the first edition of the DC Heroes RPG, published by Mayfair Games in 1985. I didn't discover the game until about 1996, when it turned up like buried treasure in the back of a "hole in the wall" comic shop.

DC Heroes is from the old-school of RPGs. No miniatures, cards or extra fluff to buy. Just rulebooks, dice and your imagination. Just the way I like it. (True, the first edition came with some reference cards and 2D cardboard character standups, but who used those?)

The system is more about story and action than about stats and mechanics. But that's not to say it is "rules lite" or without an exhaustive structure with which to build and populate detailed worlds.

Central to DC Heroes are two tables. The Action Table and the Result Table. Each table is a number-filled grid. Running vertically along the left edge and horizontally along the top are sequential ranges of numbers. Using these tables, the GM (Game Master, the player who acts as "referee") compares and cross references the stats of one character with the appropriate defensive stat of the character or object they are trying to damage or effect. As quickly as you can say "Battleship", the required number to be rolled for success is located and play proceeds.

At the heart of the game is the exponential AP (Attribute Point) framework, which earned the system the nickname MEGS (Mayfair's Exponential Gaming System). Everything in the game is measured in APs. Distance, time, weight, intelligence, strength, density, charisma...everything. And each AP value is worth double the value preceding it. So 5 APs is twice the distance of 4 APs and four times the distance of 3 APs.

An easily referenced benchmark ruler on the GM screen makes "winging it" both easy and logically consistent. Likewise, a few simple formulas included on the screen make it easy to determine how long it takes to travel any given distance at any given speed.

So in the lower power levels, the difference between skill or strength between characters is not obvious. This may bother players running a strictly "street-level" campaign and who want every tiny detail of their characters to have clear effect on game play. But for those running a campaign with characters of diverse power levels, looking for a rock'em sock'em larger than life superhero/super villain experience, MEGS simulates the feel and scope of comic book action and characterization remarkably well.

In fact, I've found the system works well in multiple genres, provided a "cinematic" style of adventure is desired. It's also easy to find character stats for all kinds of non-DC superheroes and characters online. So in my opinion, even Marvel comics fans are better off using these rules than TSR's Marvel Superheroes RPG system or any system released for Marvel superheroes since then.

Here are a few great resources for finding DC Heroes stats for all kinds of characters, including DC, other comic companies and more:
Writeups.org- http://www.writeups.org/
DC Heroes Siskoid's Collection- http://www.siskoid.com/RPG/DCHeroes/DCHeroesAlpha.html

Character creation in DC Heroes allows for virtually any concept you can think of. Unlike some other superhero RPGs, powers and skills don't come in "packages", and powers themselves are divided into distinct abilities. For example, fire control and fire production must be purchased separately. The ability to custom-build your own hero or villain concept from the ground up is staggering.

Character generation can be a beast, so I highly recommend the following character generator, which handles all the book-keeping and makes the creation process an enjoyable, purely creative experience.

DC Heroes has been out of print for awhile now, but finding the rulebooks and a number of supplements and adventure modules is not too difficult or expensive. Below is a breakdown of the various editions of the game, some pros and cons of rules/format changes, and links to where they can be purchased for a good price (at the time of this posting).


The Batman RPG- Same system, but only includes skills and some of the powers from the DC Heroes RPG, plus stats for the late 80's Bat-universe characters and gadgets. A good intro to the system and all you need to run a street-level or "Batman-esque" campaign that may include some super powers.


2nd Edition DC Heroes RPG- Box set including two rulebooks and one book filled with numerous late 80's/early 90's DC character stats, plus a "combat wheel" that serves the same role as the 2 AP tables on a GM's screen. (Though less effectively and intuitively in my opinion.)
Gadget "recharge/reload/repair" rules have been abstracted some, with "reliability numbers" and dice rolls determining when an item needs to be recharged, reloaded or repaired rather than the more realistic (and book-keeping intensive) rules of 1st edition.


1st Edition Blood Of Heroes RPG, by Pulsar Games- Uses the same rules and most of the same text as DC Heroes 3rd edition, but with all the DC characters and concepts removed and replaced with (fairly uninteresting and poorly drawn) original characters. Still a great resource for the 3rd edition rules!


Blood Of Heroes Sidekick Source book, by Pulsar Games- Contrary to the name, this is NOT a book about sidekicks. Instead it's an "expansion" to the BOH/3rd edition rules, with new powers, skills and customization options. DEFINITELY worth getting!


Blood Of Heroes, Special Edition, by Pulsar Games- I haven't purchased or looked through this book myself, but it's probably the best option for your money. Although it doesn't include any DC character stats, it collects Blood Of Heroes and the Sidekick Source book into a single volume. Since DC character stats can be found online or easily created using the character generator software and some common comic book knowledge, this book gets my highest recommendation, despite not having examined it firsthand.

The DC Heroes Role-playing Game earns the distinction of being the RPG game I've had to have "the talk" about more than once. No, I don't mean the one about birds and bees, the other one about possibly being a devil worshiper because I play RPGs. Okay, to be fair I was never even remotely accused of that. But I've had more than one Christian be "concerned" about me because of this game.

These concerns were based largely on ignorance and fear of the unknown and were easy to dismiss or deal with in a constructive way (despite involving some uncomfortable conversations). But for different reasons early on, I had some concerns myself.

The skill used to measure knowledge of magic in DC Heroes is called "Occultist", which shot up a red flag for me. Probably just because I could hear the word "cult" in there somewhere. So I looked up the word "occult" and here's what I found: n. matters regarded as involving the action or influence of supernatural or super normal powers or some secret knowledge of them.

Even in the real world, in relation to real witchcraft, a person can study and have knowledge of the occult, even be an "occultist", without serving evil. In fact looking strictly at the definition, one could argue that Christians should aim to be the best "occultists" in the world, given that the Bible accurately describes the creatures, powers and activities of the supernatural world.

I concluded that if a Christian could be a God-honoring "occultist" in the real world, in matters of real supernatural powers, then there ought to be zero problem with being one in a fictional setting regarding a fictional version of supernatural realities which the Bible does not even comment on.
Given my personal experience, the nature of paper and pencil RPGs, and the mystical portions of the DC universe as represented in the game rules, I think it's fairly likely, at some point, to have cause for worthwhile thought or discussion of moral or spiritual matters.

DC Heroes, no matter which version you use, is a fantastic, adaptable role-playing system that I highly recommend.