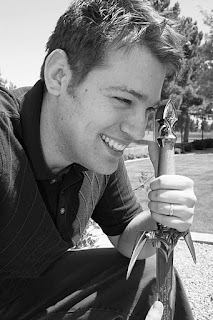 After some very welcome time off, I'm back in the saddle and geared up for a HUGE 2012! God promises tomorrow to no one, but if we're on the same page with him, as I aim for and hope we are, here's some of what's coming this year:

Although 2011 may have seemed like a "quiet" year for Spirit Blade Productions, 2012 will be making up for it! This week I'm gearing up for the official read-through of the script for "Spirit Blade 3" (final title still TBA) this Saturday afternoon. Michael Tully(Raan) and Sean Anthony Roberts(Saolos) will both be on speaker phone from out of state to read the script with me and some other friends, family and returning cast members. Then auditions will begin sometime in February or March! So stay tuned if you wanna be involved!

At the same time, I will also be polishing the script for the second episode of "Pilgrim's Progress", which I will schedule a read-through for in a few more months and then hold another set of auditions to cast it.

In February, we'll see the release of our first contracted Enhanced Audio Book, "The Golden Knight: The Boy Is Summoned"! I'm working on the mixing right now and can't wait to have it out there for you guys to enjoy!

And sometime between now and June we'll be releasing "Spirit Blade: The Adventure Card Game", which I will be spilling more beans about soon!

There are a few things that may also be coming to make the back half of the year interesting, but it's still too soon to talk about them. In the meantime, please keep this little company in your prayer time, asking that God will empower it, and all those involved, to accomplish his plans for it this year, and that I will have the wisdom, discernment and willingness to take it wherever he wants it to go.

As always, thanks for your support! See you back here Wednesday for our continued "Search For Truth"!