This week I checked out three of DC's new titles from the launch of their new DC Universe continuity. 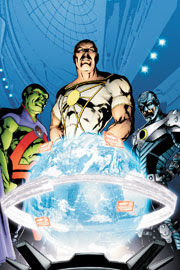 I'd read and enjoyed some previous iterations of this book and these characters, but this one wasn't really working for me. If you're looking for a comic book about super-powered people who don't necessarily wear costumes and aren't necessarily heroic, this might be a good fit for you. That was one of the draws for me in previous versions. But the writing this time around seemed to simply present the concept of the book rather than introduce us to who these characters are. It felt like a page by page run down of quick character bios that included little more than their names and their powers. Speaking of powers, I'd forgotten that the power sets represented in this book are a bit odd and abstract at times. One guy can control and communicate with cities (huh?), another woman can mentally access any information from every media source in the world and a young girl can do anything the physics of the 21st century can make possible... or something like that. It was all a little odd, and I highly doubt I'll be sticking with this title, as much an I enjoyed seeing Martian Manhunter. 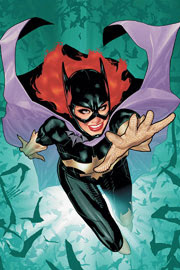 I wasn't going to even try this title. The cover, with Barbara Gordon in a costume much like her classic black, yellow and purple digs, with a big ruby lipstoick smile on her face and shampoo commercial hair flowing out the back, just looked like a betrayal of the entire Batman concept, which Barbara supposedly used as inspiration for hewr crime-fighting persona. Frankly, I saw little resemblance... until I started reading. I should have trusted what I know of Gail Simone. She can write the phone book and make it a compelling character piece. We get to be inside Barbara's mind for most of the book, experiencing her excitement over being able to fight crime again and the scars of fear the Joker left behind when he paralyzed her. For those concerned that her paralysis is being wiped away, don't be. It's a major part of her character and informs everythign she does. The story is also the same gritty tale with the creepiest villains that I've come to expect from Simone's work on Birds Of Prey and The Secret Six. I picked this up as a last minute impulse decision and am SO glad I didn't ultimately judge this book by its terrible cover. I'm amazed to say it, but I'll probably be buying this book every month. 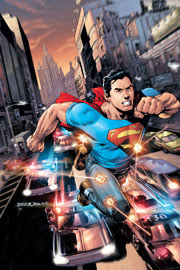 And now for the big boy. The re-launch of the world's most famous hero and the re-imagining of his origins. I'm thrilled that Grant Morrison is not destroying this book so far. I'm very interested in where things will go. Rather than re-tell his Krypton or Smallville origins, this origin story centers on the first six months after he first appeared in Metropolis, and establishes him as the first super-human that anyone has ever seen.

Although we get a few nice moments with just Clark, this story is mostly about how people perceive "Superman" and so our perspective is somewhat that of an outsider. There were only one or two minor details I found confusing. The rest of the story made perfect sense, which I think is a step back in the right direction for Morrison, who is taking Superman back to his roots as a social crusader, looking out for the underdog. It gives the book a slightly liberal political vibe, but I'm not very political myself and even if I was I don't think it would bother me.

My one point of concern is the furrowed brow that Superman seems to constantly have. He strikes me as being an angry man. Granted, this is in keeping with the character of Superman as he first appeared in the late 1930's, but I hope we will also get to see the personality traits of the later Superman, who was optimistic and quick to smile, while being kind and polite in all of his interactions.

Based on the way Superman's powers are not fully developed yet in this story, I wouldn't be surprised is Morrison is planning to take him on an evolutionary journey that leads him through his various interpretations, so I'm hopeful the "angry Superman" isn't the one we'll be stuck with in the end. Either way I'm intrigued and plan to follow this book at least until the first story arc is complete.
Posted by Paeter Frandsen at 9:46 AM